Skip to content
" title="vibeandventure on Instagram"> Instagram
Cart
Our guest blogger Chris Toone was kind enough to share one of his amazing travel adventures with our community. As you read about his adventure you begin to appreciate the often unpredictable and adventurous part of trying to get to point B. That is the journey itself. Stories like this are a great example of how without the adventure and journey, the destination wouldn't be a story to talk about. The adventure to get there completes that story.

Let me clarify one thing right from the beginning: we weren’t actually in the middle of nowhere. That’s simply how it felt, but to be honest that’s just the way we like it!

As I combed through the research before our trip to Panama, I came across a picture of a swimming hole that blew me away. The moment I saw it, I knew we needed to experience it.

There was only one problem: nothing I read would tell us where it was located, let alone how to navigate the hike.

I stumbled deep into the black hole of the internet, searching for any clues that might point us in the right direction. The only thing that I managed to accomplish that day was leaving a solid imprint of my butt on the couch cushion. Disappointing to say the least.

That might be enough to call it quits for some, but it only fueled the fire within. The longer I went without finding what I was looking for, the more determined I became. We were going to find a way to Cascada Choclón. There was no doubt in my mind.

Another day with no luck had passed me by when all of a sudden the sunlight beamed into the living room. No, it wasn’t actually that dramatic, but shortly after opening the blinds I came across our first solid lead.

It’s possible that “solid” is a gross overstatement as the website merely provided the GPS coordinates for the trailhead. Sure, it wasn’t much to go on, but that was enough to get the ball rolling!

I continued scouring every piece of information that I could find. You name it, I inspected every detail of it. When Heather and I took a closer look at satellite imaging, we could see where the jungle appeared to part along the river, providing a much-needed hint as to where the falls were located. That was enough convincing for us!

We had a starting point and now we had an idea of which direction to hike towards. Fast forward to arriving in Panama: it was time for the adventure!

As soon as we turned off the main road in Boquete, we quickly became grateful that we opted for the SUV rental. As the pavement disappeared, our cell service wasn’t far behind.

The farther we drove, the slower we went, carefully maneuvering over every bump, boulder, and holes in the road. As the minutes ticked by, so did our confidence even though neither of us would ever vocalize it.

After what felt like hours (in reality it was less than 30 minutes), we had reached the starting point.

As the car came to a halt, the cloud of dust that we had been leaving in our tracks quickly engulfed our field of vision. Once it cleared, we realized just how “off the beaten track” we were. The sounds of the jungle beckoned beyond the field that lay ahead as we took one last look at our maps. 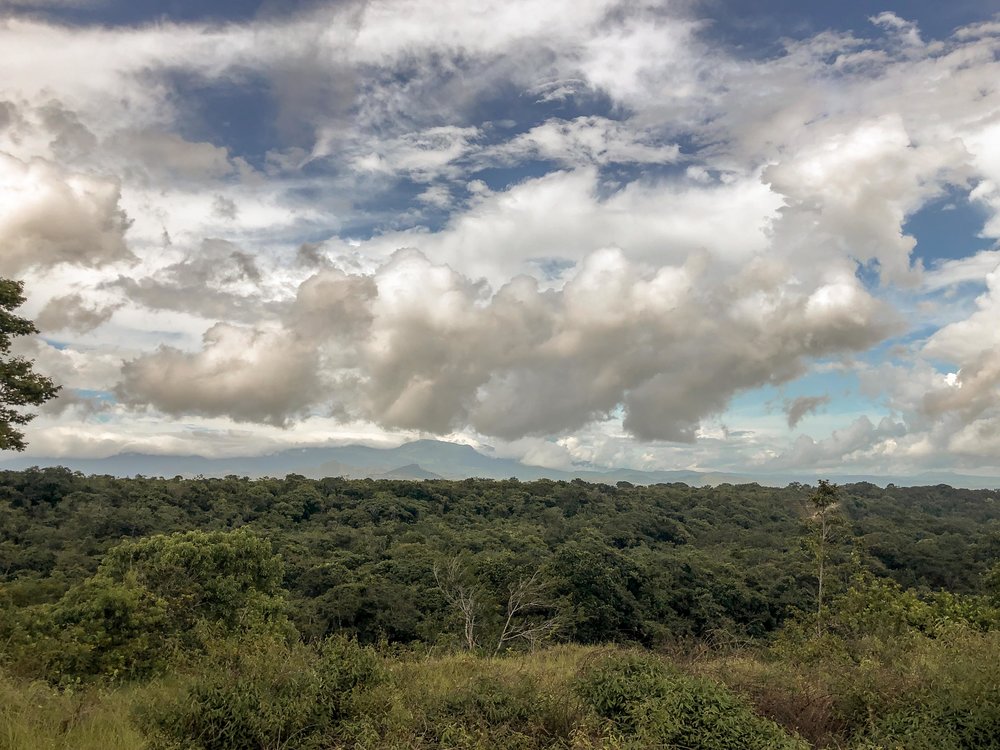 The hike started by traversing through an open meadow as the sun beat down our backs, the humidity making it impossible for any relief. Upon reaching the first junction, we referred back at our makeshift maps and descended down to the forest floor, following the sounds of the rushing river below.

As we trekked deeper into the brush, the canopy quickly began to rise straight towards the sky, providing us with much-needed relief from the heat. Our compass instructed us to go left around a closed gate but our ears pointed us to the right, towards the sound of the river. We stood there confused, unsure of what to do.

At this point the sun had successfully forced us to perspire off our umpteen layers of sunscreen and bug spray, leaving us susceptible to the mosquitoes that began swarming around. We were in no position to have a lengthy debate. Lacking confidence in either direction, we decided to climb back out to the trailhead.

Maybe we had incorrectly compiled our map. Maybe if we kept walking through the field we would have discovered a different, easier way to reach the river.

It seemed like a good idea at the time, but as it turned out that we were wrong. Very wrong.

As we continued down the road, the intensity of the sun seemed to instantly drain all of our energy. I could feel my body temperature rising, but I was too exhausted to do anything about it. Each step we took was met with an unsuccessful prayer for cloud cover.

Ten minutes and a new sunburn later, we had reached another dead end.

This was the point that every ounce of my being was telling me to pack up and call it a day. Our confidence was waning, the heat was relentless, and we were simply out of ideas as we slowly retreated back to the car. I remember Heather making jokes along the way, trying to make light of the situation and keep my morale in tact.

A second look at the scattered research we had revealed a small access path farther down the dirt road. Maybe that was what we were looking for, so we decided to keep driving north.

I could tell that Heather wasn’t too sure about continuing on and to be honest, even after regrouping in the air-conditioned car, I wasn’t either. As a rainstorm moved through, we took the time to once again reevaluate what we were doing.

We felt confident and frustrated at the same time. Confident that we were in the general vicinity. Frustrated that no matter how we approached it, we couldn’t find what we were looking for.

The road back to the original trailhead provided some much needed perspective as we passed run-down homes with missing walls and children playing in the rain. I couldn’t help but think of the number of tourists that travel through Panama each year and yet had no idea that this part of the country existed. Although we came to the conclusion that we would give our adventure one more try, I decided that after the experience we had up to that point, I would be content no matter what. After all, it was Dan Eldon that once said “The journey is the destination.”

Once we descended back into the jungle, reached the gate and shuffled our way around it, we were back on track and heading in the right direction.

We quickly descended farther into the forest floor, hugging a makeshift PVC pipe railing along a ridge and using the vines as support as we worked our way down into the canyon. The path was completely overgrown with thick brush rising far above our heads. Thrusting the branches aside, we did our best to stick to the trail that was quickly narrowing with each step we took.

The ecosystem of any jungle is the most diverse in the world, oftentimes leading to regular discoveries of new plants and animals. Panama alone is home to over 1,500 kinds of trees and 5 species of cats, including jaguars, ocelots, and pumas. It’s an eerie, yet humbling feeling to be amongst it all; a place where the silence is deafening and only broken by an occasional howler monkey crying out in the distance or a bird rummaging amongst the fallen leaves for food.

We silently trekked along the forest floor, remaining vigilant of our surroundings.

The moment we began to feel comfortable, a loud crash echoed through the forest and left us frozen in our tracks. We exchanged nervous glances, trying to control our breathing and telepathically communicate what to do next.

Tip-toeing forward as quietly as possible, we did our best to avoid the branches that covered our path. Needless to say, it was a humbling reminder that regardless of how isolated we felt, we weren’t alone.

Finally, the thick of the brush parted as we reached the bank of the river, reinvigorating the idea that we could actually find these waterfalls.

We searched up and down the river for a way to cross, but it quickly became clear that it wouldn’t be as simple as jumping between rocks. We would have to carefully choose the path of least resistance.

Although our faces may have expressed doubt, we were so close that we could feel it. There was no turning back.

The path continued to disappear before our eyes, winding its way through the overgrown brush before depositing us back onto the rocks of the river and leaving us with newly acquired scrapes up and down our legs.

We continued moving northwest, systematically evaluating every step we took as our feet slipped off the rocks. The energy in the forest changed from nervousness to excitement as we inched closer. We were nearly there.

Just beyond the final bend of the river, the waterfalls were waiting to greet us. It was even more majestic than I had seen in the pictures.

We were both left speechless, as we peered up towards an amphitheater of hanging vines and cascading waterfalls.

The beautiful blue waters of the pool were irresistible. We couldn’t help but jump in and soaking up the moment. A rush of emotions engulfed us, leaving nothing but relief, gratefulness, and a feeling of peace behind. We had truly uncovered paradise in the Panamanian jungle. 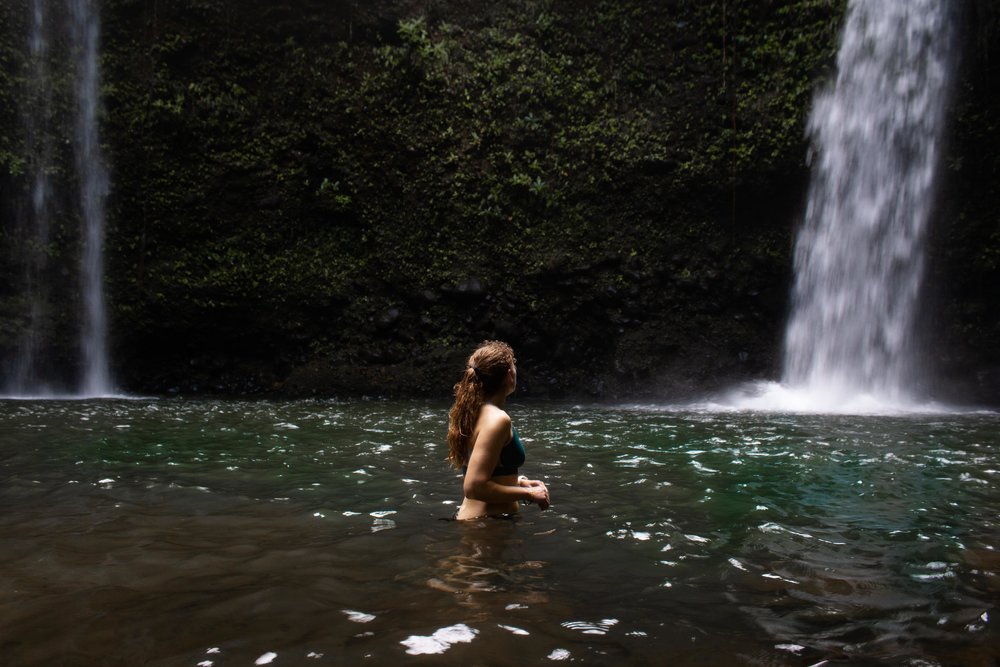 The forest floor quickly grew dark as the sun began to drop below the horizon, signaling that it was time to pack up and move out.

Back on the trail we went, accompanied by the beautiful yet eerie silence, this time with no unexpected noises.

We made it to the car unscathed, feeling sunburnt and dehydrated yet eternally grateful for all that had happened that day. After all, we had found our own little slice of Panama that, at that moment at least, felt truly untouched.

As I reflect on the adventure we had, I can’t help but think of one of my favorite quotes from the late Anthony Bourdain: “The journey is part of the experience - an expression of the seriousness of one’s intent. One doesn’t take the A train to Mecca.”